POSTED ON July 14, 2019 BY Christina Bauer IN Adventures, New Releases 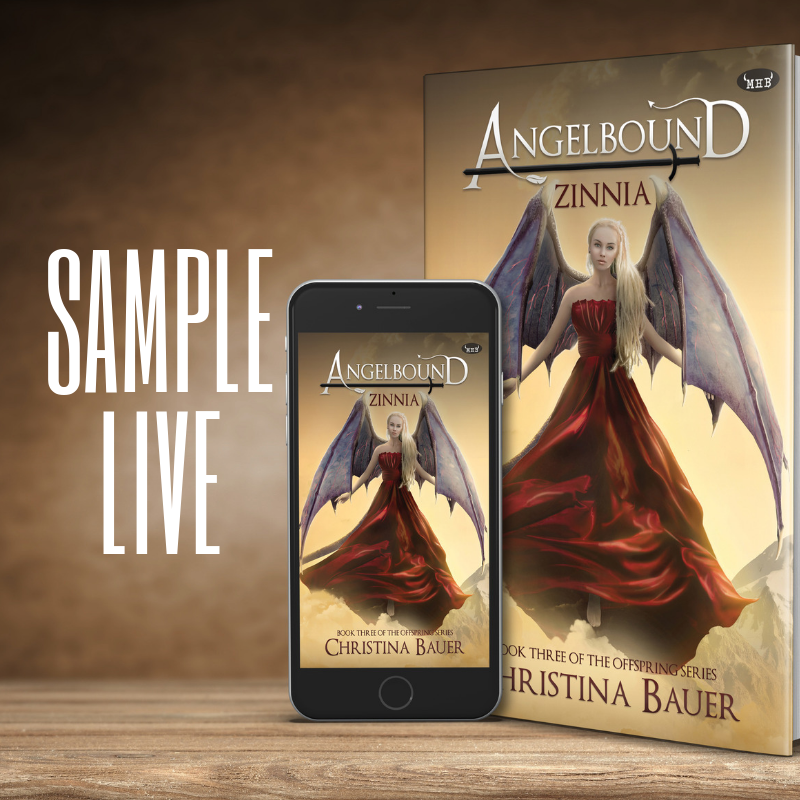 I’m super excited to share chapter one of the ZINNIA, the new Angelbound Origins Book 3!!! Plus, there are savings across the series to celebrate the launch of ZINNIA…

Tucking my unicorn comforter under my chin, I come to a big decision.

Naptime is for losers.

I may only be nine—well, almost ten—but I know one thing: there are way too many rules for dragon princesses like me. For starters, we’re supposed to take naps every bleeding afternoon. No way. Napping is for babies. That’s why I’m sneaking out today to see my best friend, LT.

Twisting under my covers, I check out my bedroom. There are pink curtains, white furniture, and the royal crest of Furonium over the door. My parents rule all the dragon shifters, so that crest-thingy hangs everywhere. My sisters, Kaps and Hunter, now lie in their bunk beds across the room. So you know, my family stays in human form most of the time. No dragon caves for us, thank you very much. Those places have bats.

Squinting, I look at my sisters more closely. Are they really out of it? Can I sneak away? Like always, Kaps lays half-way off the top bunk. Her left arm and leg dangle off the mattress. Wisps of brown hair hang over her mouth, blowing in and out with her snores. I shake my head.

Even asleep, my twin is noisy.

Meanwhile, Huntress rests curled up on her side. Her shoulders rise and fall silently. Huntress never lets out a sound, even when she’s snoozing.

Both my sisters are totally zonked.

Walking on tippy-toe, I creep over to my dresser. My red party dress is already laid out on top. I brush my fingers across it. So soft. I slip on the fluffy prettiness, then choose matching patent leather shoes. Turning, I look at myself in the mirror: short white-blonde hair, pale skin, big blue eyes and—like all dragon shifters in Furonium—a long tail with an arrowhead-shaped end. Everyone says I look like Mum, while Kaps is a mini-Da.

Tilting my head, I try to imagine my friend. It’s been months since he left for school. What if I don’t recognize LT any more? I squish my eyes shut extra hard and picture his face. Dark hair? Yes. Green eyes for sure. But mostly what I remember about LT is his music. Acoustic guitar. He plays tunes while I sing along; it’s what we call our beat. Those songs echo in my mind.

All of a sudden my chest feels tight, like there’s a rope around my ribs. I hate that LT left for music shcool. Don’t get me wrong. I understand why my friend went to Earth to learn guitar stuff. Acoustic isn’t exactly big with dragons. Plus LT’s mum, Sienna, is both human and a famous cello player. So she knew the perfect school for LT.

And then my best friend went away.

That rope-feeling gets even tighter.

Shaking my head, I force on a smile. There’s no reason to feel sad about LT today. He’s back from school. Plus, my friend loves playing guitar in the afternoon. No doubt about it. Right now, LT is sitting on the bench under his favorite tree, plucking out a tune. Now I need to leave the palace, cross the grounds to LT’s cottage, and see him. My stomach twists like that time I ate all those leaves on a dare from Kaps. Must be getting excited. Staying super quiet, I step across the wood floor and grab the door handle.

All of a sudden, sheets rustle nearby. Kaps flips off her covers, hopping off the top bunk to land perfectly on the floor. She’s wearing explorer khakis, the kind that are packed with hidden pockets. Her tail sways happily behind her. Both Kaps and I are Firelord tribe, so our scales are all black.

“Off for the royal treasury?” asks Kaps. My twin is obsessed with the miles of vaults under our palace. It’s the dragon in her. With Kaps, everything is treasure, treasure, and more treasure. I could be wearing a bathing suit and she’d ask if I’m off to the royal vaults.

“Not really,” I say slowly.

A figure appears out of thin air beside Kaps—someone with brown hair, violet eyes, and a white-scaled tail. It’s Huntress. I didn’t hear my older sister slip out of bed or anything, but that’s Huntress for you. Glass dragons turn invisible and sneak around. It’s what they do. Like always, Huntress wears battle leathers.

“You’re off to see LT,” states Huntress. When I was little, I used to wonder how Huntress always knew everything. Now I’m big and I have it all figured out. Knowing stuff is just a glass dragon thing.

“Please.” Huntress waves her hand. “We all know LT. He’s been Zin’s best friend since forever.”

“But I’m Zin’s twin,” snaps Kaps. “That makes me her best friend.” She turns to me. “There’s no way you’re off to see some dragon boy, right?”

I debate about lying, but it’s pointless with my sisters. “Huntress is right. I plan on seeing LT today. Alone.”

Huntress pins me with her mum-look. It’s the one she uses when I’m about to burn my hand or make one of the servants cry. “LT lives in a cottage to the west of the palace. You can’t go there by yourself. That’s dangerous.”

I kick at the floor. Another lecture about safety from Huntress. Sometimes my sister is a grown-up trapped in a ten year old’s body.

“Come on,” sighs Kaps. “There’s no danger.” My twin points to Huntress. “You give me the exact same speech every time I hit the vaults. Nothing ever happens. We’re perfectly safe.”

“See, Huntress?” I ask hopefully. “Even Kaps agrees. The bad dragons are gone.”

Huntress sets her hands on her hips. “The dragons of the Triumverate stopped trying to break into the palace about five weeks ago. That’s one single month. Mark my words. The Triumberate hasn’t given up. You don’t know them like I do.”

And Huntress is right. The Triumverate are renegade dragons loyal to the old Emperor, Chimera. Not sure why they care—grandpa Chimera’s been dead for years and he was a total creep—but dragons can be weird. Now the Triumverate hates my family and any tribe that follows us (which means they hate most everybody). In fact, it was the Triumverate who destroyed Huntress’ village. Back then, my big sister was a little kid. Huntress was the only survivor. Afterward we adopted Huntress because—as Mum and Da said—anyone that strong was already a royal anyway.

“I’ve got it.” Kaps raises her hand. “Rumors are, someone found a map to Pandora’s box. That thing has more than enough power to stop the Triumverate forever.”

Kaps tells me all about rare and strange treasures. Pandora’s box is one of her favorites. Humans think Pandora was one of them, but she was really a dragon shifter and mage. Also, Pandora’s magic comes from the arc of red stars that shine day and night over Furonium. We call them Pandora’s Starfall.

“Let me guess,” I say. “Pandora’s box might be hidden in the royal vaults.”

I creep closer to the door. “Looking around will take a lot of time. You guys hit the treasury without me.”

“No,” says Huntress in her mum-voice again. “It isn’t safe. The Triumverate want revenge. Uncle Maxon killed Chimera. Now someone in our family must die and make things even.” Huntress makes little quotation marks with her fingers when she says that last part. “The three of us?” She gestures between herself, me and Kaps. “We’re the easiest targets.”

It’s all true, but it sucks. I twist at the skirt of my party dress. “I just want to hear LT play.”

Huntress folds her arms over her chest. “That’s why we’ll all visit LT.”

I don’t like the way Huntress says the word all. “What do you mean?” I ask.

“Mum and Da will be there too,” answers Huntress. “I figured you’d sneak off to see LT today, so I invited them along.” Huntress’ mouth arches into a sneaky half-smile. “We all want to hear you sing.”

A chill spreads over my body. “But I only sing for LT.”

Kaps rolls her eyes again. “How hard can it be? La la la. Just sing.”

“It’s …” I begin to explain, but I can’t find the words. For me, singing activates my magic. And I can’t control that power yet. If I try to sing with other people round, magic just clogs up my throat. All I can do is hum. Unless it’s only me and LT; then I can sing just fine.

“That’s none of your beeswax,” I reply. When we were little, I made the mistake of telling Kaps I thought LT was my Rhana. That’s a dragon word for your life mate. Afterward, Kaps teased me for months. I still can hear her chants in my head.

If I told Kaps about how LT helps both my singing and my magic, then she’d never shut up.

Huntress ignores the whole LT situation. Instead, she moves to block the door. “We’re all going with you. Or you can stay in bed, Zinnia. It is naptime, after all. I’ll just alert the guards.”

My mouth falls open in shock. “Not fair. Grown-up princesses shouldn’t have to take naps.” I look to Kaps. She has to agree with me on this one.

Kaps stands beside my older sister. “I’m with Huntress,” she declares. “Nap now or show us what’s really going on with LT and your singing.”

I scrunch up my mouth and think things through. It’s true that I can be sneaky like Kaps. And I’m also as good a warrior as Huntress. But I can’t fight both my sisters at once.

And so the three of us head out. But I take off at a run.