POSTED ON January 23, 2019 BY Christina Bauer IN Christina 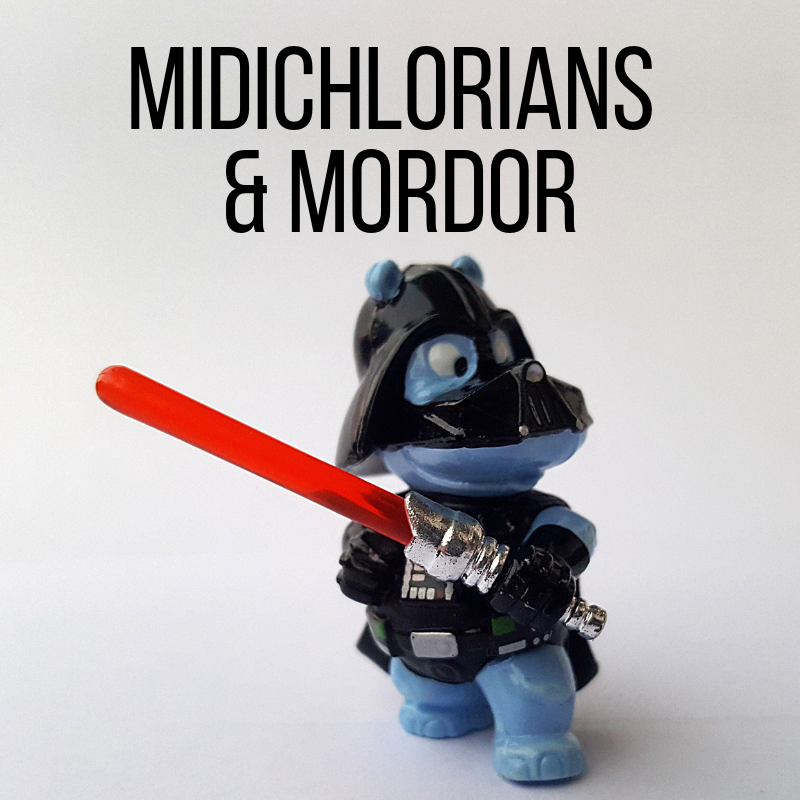 As a writer of science fiction and fantasy, I must create a ton of world details that never get used. To figure out which bits stay and go, I use what I call my midichlorians and Mordor rules.

As a crazy-ass Star Wars fan since forever, I was so excited for the prequel movies. Then I got really bummed when creator George Lucas used said prequels to explain away the infamous force as nothing more than sorta-bacteria called midichlorians. Since I’m a world builder myself, I get why Lucas did it. When it comes to story-telling, world building is a pretty specific skill. I mean, it’s hard enough to tell a good narrative without adding the extra hassle of placing everything in a new and believable environment. In the process, you build out a shit-ton of stuff. Then you have to push some of it off the page as a direct reference? Not easy.

In other words, it was important for Lucas to know how the force worked so that the rules of it stayed consistent. It couldn’t cause a burst of light in one scene and nothing the next. Readers and viewers will sense if your world building is shoddy, even if it isn’t explicitly spelled out.

Yet not all that stuff deserves space on the page and-or screen.

As you can probably guess, I thought the whole idea of midichlorians distracted from the narrative. At the time, I was like, what? Supernatural bacteria? Are you serious? It pulled me out of the story, fast. Unless we were going to meet midichlorian man (or something similar) later in the movie, I really didn’t need to know about them.

All of which raised a question for yours truly as an author: how should I decide what to cut and keep? The answer became my Mordor rule…

As a self-proclaimed girl geek, I love The Lord of the Rings by JRR Tolkien. I loved it even more when Peter Jackson brought it to the silver screen. Of the three books in the series, the first (The Fellowship of the Ring) is the trickiest to turn into a narrative because not a ton happens. Seriously. It’s like, they leave the Shire and meh. In my opinion, Fellowship is also the best script/movie of all three in Peter Jackson’s trilogy.

The Mordor rule is why.

In the director’s commentary for fellowship, Jackson shared how book 1 was the toughest script, especially since Tolkien’s original text was so dense. It’s easy to get bogged down in the author’s early and extensive world building (Hello, Tom Bombadil!). So, whenever the writing team created something, they asked the question: “Does it get the ring closer to Mordor?”

A brilliant move, and it totally worked.

In my own writing, I try to emulate that as well. Is this scene or detail something that I love because I created it … or is it critical to moving the story forward?

I just wrote a chapter where one of my characters, Lincoln, fights a Dissolus demon. I had to define all the details on that big bad, which was an assload of work. Eventually, I decided that a Dissolus was a waist-high, possessed blob of mayo. Fun! At the same time, I figured out how the Dissolus affected the world around it. Turns out, it’s really hard to get Dissolus entrails off your body armor. That’s a funny bit of trivia, and DAY-um, I wanted it in the story. But the mention never felt organic. It was more: Hey, check out this great slime demon thing I came up with! So I had to cut it.

The good news is this: eventually, my slime demon entrails will find a home. I can’t tell you where or how, or even if it will be with Lincoln’s series, but it will happen. Mostly, I’ll realize the ‘new home’ process took place about a moment after I think: hey, that chapter was super easy to write! And then I’ll see how the entrails (or whatever) finally found their place.

For me, this entire process has gotten easier with time. When writing my first novel, I’d agonize over the equivalent of a lost entrails idea like someone was asking to sever my pinky. Fifteen-plus books later, I’ve learned to mourn a bit, pull up my big girl panties, and move on.

Which is what I must do right now. Goodbye for the moment, Dissolus entrails concept! Back to writing!